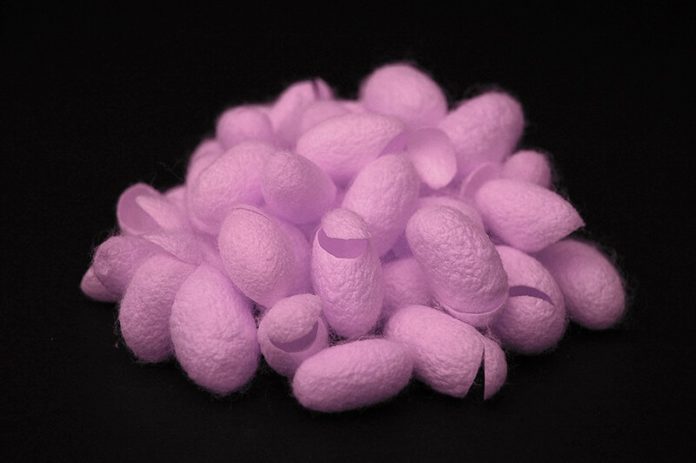 Scientists are busy spinning silks that glow in the dark. But these silkworms, unlike others that have been fed rainbow-colored dyes, don’t need any dietary interventions to spin in color: They’ve been genetically engineered to produce fluorescent skeins and in addition, attack bacteria when illuminated by a green light.

The gene for “mKate2,” a far-red fluorescent protein, was inserted into a silk host to realize the benefits of both silk and green light. Shining a green light on the resulting hybrid generates reactive oxygen species (ROS), which are effective radicals for breaking down organic contaminants and attacking the membrane and DNA of pathogens. The process adds fluorescence to silk to facilitate disinfection or decontamination by using visible light.

When E. coli on the fluorescent silk were illuminated by a weak green light for 60 minutes, the bacteria’s survival rate dropped to 45 percent.

The team believes that green-light activated red fluorescent silk could be both more efficient and scalable than other plasmonic photocatalysts, in which metal nanoparticles hybridized from semiconductor materials also use visible light but could still pose negative environmental consequences.

See Also
Stability Of Coronavirus On Skin, Dollar And Clothes Revealed By US Army Research

“The silk photocatalysts would be easier and safer to produce than plasmonic ones since silkworms, rather than industrial facilities, provide the host for ROS-generating materials. It’s a completely new green manufacturing of nanomaterials,” said Young Kim, Purdue associate professor of biomedical engineering.

Because ambient white light also includes green light, the researchers anticipate that the silk hybrid material should typically have a strong enough light source to generate ROS as long as a green light controls ROS generation.

“We’re thinking about some implantable and injectable wound healing materials that dissolve over time in the body. Then we wouldn’t need to do additional surgery to take it out,” Kim said regarding their future prospects.