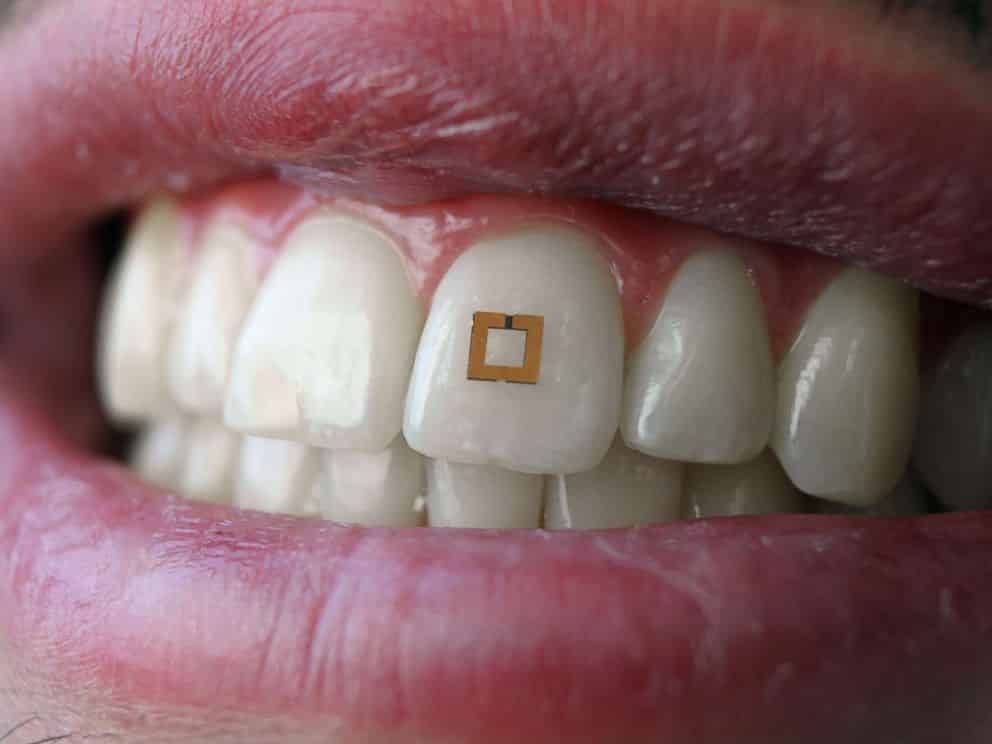 The relatively new trend in town- Wearable tech- is showing up all over the place, kicking up a storm. From health, to privacy, to straight-up sensational style, Wearable tech encompasses it all and is a huge hit with people from all strata.

Now, researchers at Tufts University have developed an amazing new sensor, only 2 millimeters on a side, that can be attached to the tooth and measure and transmit readings about glucose, salt and alcohol intake.

Monitoring in real time what happens in and around our bodies can be invaluable in the context of health care or clinical studies, but not so easy to do. That could soon change thanks to these new, miniaturized sensors. The researchers believe the future adaptations of these sensors could enable the detection and recording of a wide range of nutrients, chemicals and physiological states.

The 2mm × 2mm prototypes comprise a three-layer sensor design. It involves a middle layer of bio-responsive material, sandwiched between two gold, split-ring resonators. The bio-responsive layers in the prototypes were either a silk film or a hydrogel. The silk film can contain things like enzymes or antibodies to detect specific molecules. In doing so, it changes the chemical conditions between the resonators. The hydrogel, on the other hand, sops up the slurries in your pie hole, swelling to different sizes depending on what you’re munching.

The resonators, meanwhile, act like antennas, picking up and transmitting ambient radio frequencies. In early tests, the researchers used a portable radio frequency analyzer attached to a tablet or mobile phone to monitor the frequencies. Those frequencies change depending on what’s going on with the bio-responsive layer of the sensor.

Additionally, the sensor can change color depending on which nutrient is identified. If the sensor picks up traces of salt or ethanol, the electrical properties shift and cause the sensor to transmit a different frequency of waves at varying intensities. This shift is how nutrient data is detected, measured and transmitted to the mobile device.

The researchers tested their invention on people drinking alcohol, gargling mouthwash, or eating soup. In each case, the sensor was able to detect what the person was consuming by picking up on nutrients.

“In theory we can modify the bioresponsive layer in these sensors to target other chemicals — we are really limited only by our creativity,” said Fiorenzo Omenetto, PhD, corresponding author and the Frank C. Doble Professor of Engineering at Tufts. “We have extended common RFID [radiofrequency ID] technology to a sensor package that can dynamically read and transmit information on its environment, whether it is affixed to a tooth, to skin, or any other surface.“