Home Biotech News Sky Is Not The Limit : Fungi can now grow in Mars-like...
--Sharing is Caring--

Sky Is Not The Limit : Fungi can now grow in Mars-like conditions

Scientists recently reported in the journal Astrobiology that the fungi that live inside rocks in Antarctica have managed to survive a year and half in low-Earth orbit under punishing Mars-like conditions.

Scientists have concluded over the past decade that Mars (which like Earth is about four and a half billion years old) supported water for long periods during its first billion years, and they wonder if life that may have evolved during that time may remain on the planet in fossilized or even fresh condition. The climate back then was more temperate than today, featuring a thicker atmosphere and a more forgiving and moist climate.

Using life that exists in what they believe is this planet’s closest analogue, a team of scientists from Europe and the United States hoped to identify the kind of biosignatures that might prove useful in such a search, while also seeing if the Earthly life forms might be capable of withstanding current Mars-like conditions.

Mars is not the first vacation choice for me. And it’s probably not Cryomyces antarcticus’s either, in spite of the extreme place it calls home. Cryomyces antarcticus and its relative Cryomyces minteri, the two fungi tested independently in this study are members of a group called black fungi or black yeast for their heavily pigmented hulls that allow them to withstand a wide variety environmental stresses. Although they are opportunistic pathogens, most of these fungi live quietly in the most extreme environments on earth.

The particular black fungi used in this experiment, generally considered the toughest on the planet, live in tiny tunnels of their own creation inside Antarctic rocks. This endurance has made both black fungi and their neighbors the lichens popular test pilots for Mars-like conditions on the international space station. For example, lichen-forming fungi that create the common and beautiful orange Xanthoria elegans and also Acarospora made the same trip to the ISS previously, in a European module of the International Space Station called EXPOSE-E. Both survived the experience, and Acarospora even managed to reproduce.
But this is the first time that a non-lichen forming fungus has received the ISS treatment.

These particular two fungi – Cryomyces antarcticus and Cryomyces minteri – were collected from the McMurdo Dry Valleys of Antarctica in Southern Victoria Land, supposedly the most Mars-like place on Earth. They were isolated from dry sandstone onto a plate of fungus food called malt extract agar. This gelatinous disc was then dried along with the fungus living on it inside a dessicator, and sent into space like that. Each colony was about 1mm in diameter, and each yeast cell in it was 10 micrometers in size. Like most black yeast/fungi, they have a dark outer wall. 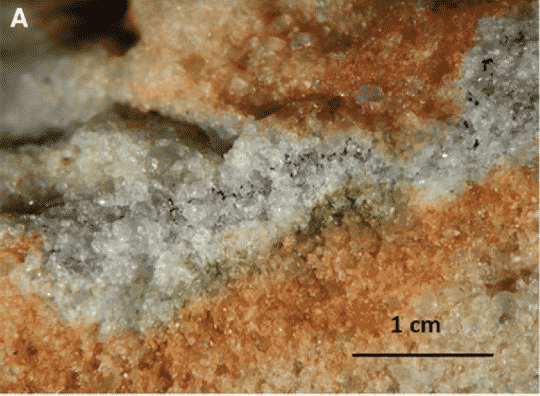 The fungi were launched into space in February 2008 and returned to Earth on September 12, 2009. During that time they were placed in a bath of gasses as similar as possible to the atmosphere of Mars and exposed to simulated full Martian UV radiation, one-thousandth Martian UV, or kept in the dark. They also endured the cosmic background radiation of space and temperature swings between -21.7°C and 42.9°C – much warmer than Mars, but the best that could be done. Control samples remained in the dark on Earth.

Once back on Earth, the colonies and rock samples were rehydrated. Their appearance had not changed during their voyage. They were then tested for viability by diluting them in water and plating the resulting solution to see how many new colonies formed. They also estimated the percentage of cells with undamaged cell membranes by using a chemical that can only penetrate damaged cell membranes.

The scientists found that the black yeast’s ability to form new colonies was severely impaired by its time on “Mars”, but it was not zero. Perhaps the weak radiation stimulated mutations or stress-response proteins that might have helped the fungi somehow.

With the full force of Martian radiation, the survival rates were about the same as for those samples kept in the dark, which is to say, nearly nil. By comparison, about 46% of control C. antarcticus samples kept in the dark back on Earth yielded colony forming units, while only about 17% of C. minteri did. Not super high rates, but still much higher than their space-faring comrades.

On the other hand, the percentage of cells with intact cell membranes was apparently much higher than the number that could reproduce. 65% of C. antarcticus cells remained intact regardless of UV exposure, while C. minteri’s survival rates fluctuated between 18 and 50%, again doing better with UV exposure than in the dark. Colonized rock communities yielded the highest percentage of intact cells of any samples when kept in the dark – around 75%, but some of the lowest when exposed to solar UV, with just 10-18 % surviving intact.
It may be that the reproductive apparati of the fungi are more sensitive to cosmic radiation than their cell membranes and walls, the authors suggest.

Even though few of the fungi exposed to Mars-like conditions survived well enough to reproduce, in all cases, at least a fraction did. Perhaps that is the material thing.
Some people have suggested that long-term survival of Earthly life is impossible on Mars. Given the extremely low reproductive ability after just 1.5 years, this study did nothing to undermine that idea either.